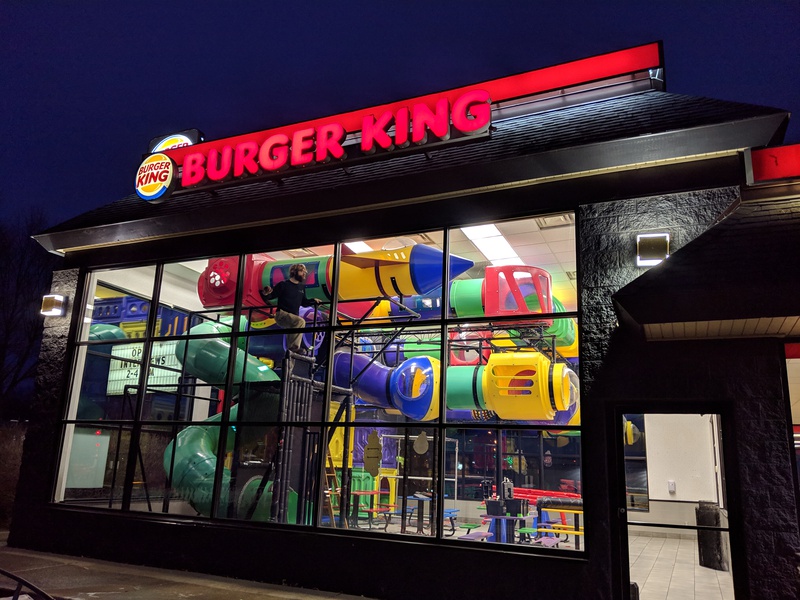 A free Play Place a friend found on a Craigslist posting. 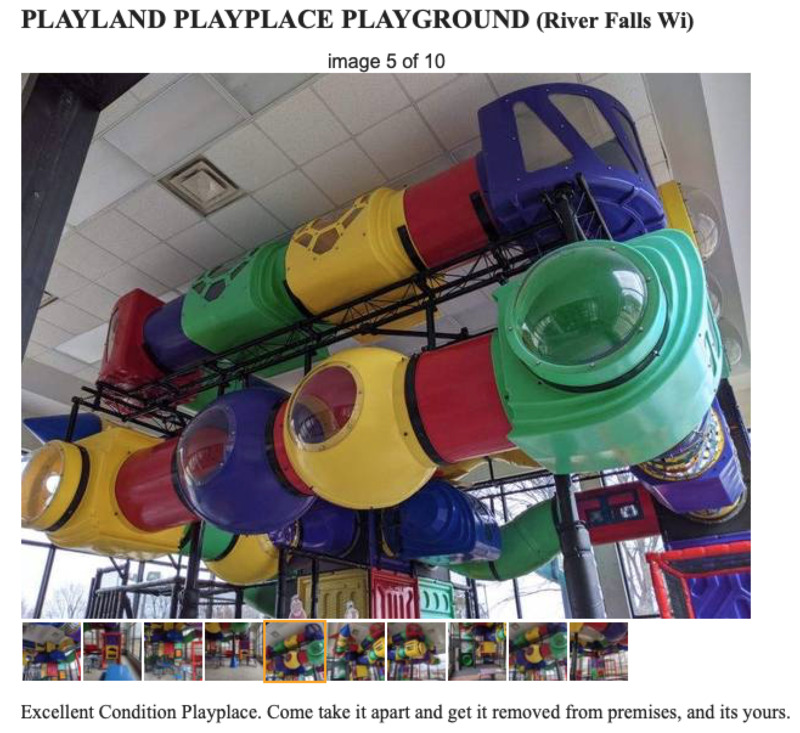 A friend happened to find this Craigslist posting on a Saturday morning, and of course I had to hop on it! I called the guy in charge of decommissioning the Burger King who wanted the Play Place out, and after talking through some details he said we had it but we had essentially the weekend to get it out before the building was to be boarded up.

Next I grabbed any and every tool I thought we might need, reserved the largest open trailer that U-Haul had, and packed a sleeping bag because I might not be coming home for a while. 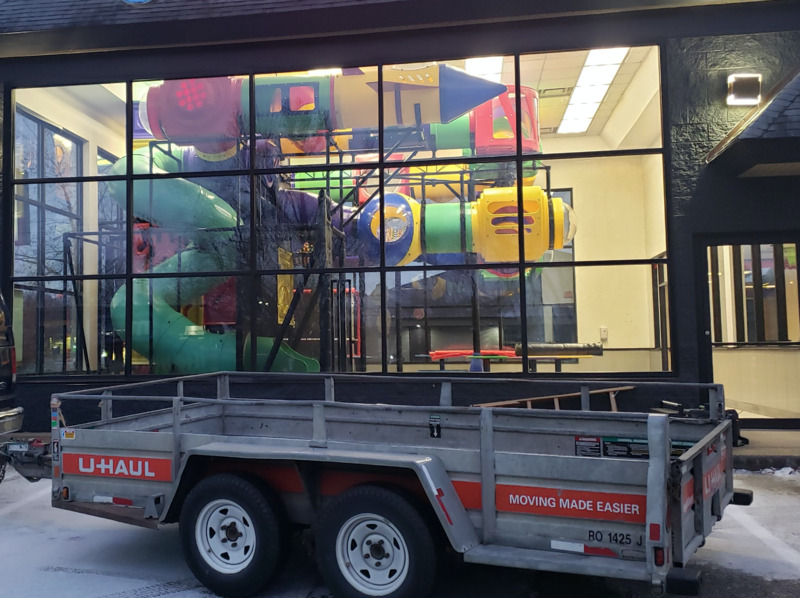 I arrived a couple hours later to find my friend Gabe at work already. I explored the Play Place some and then we figured out our plan of attack, and sent out lots of desperate messages to friends as this was clearly going to be a very big job. 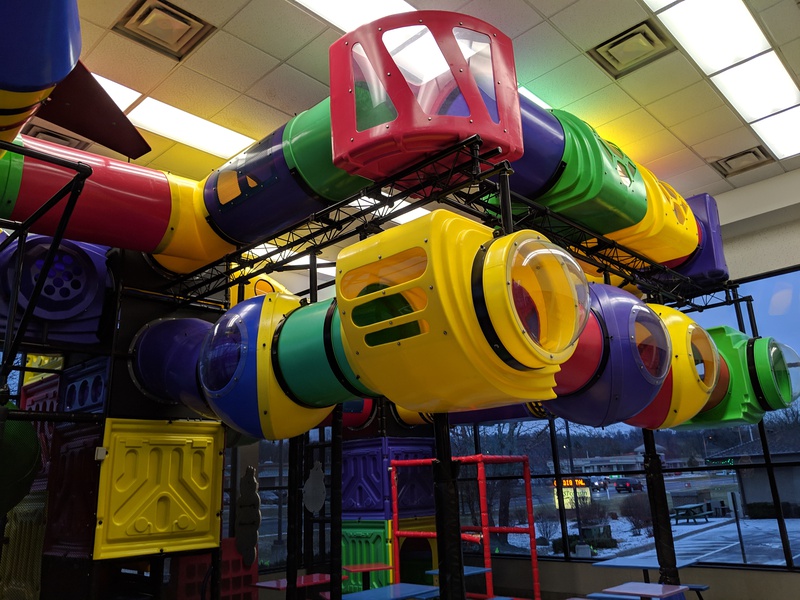 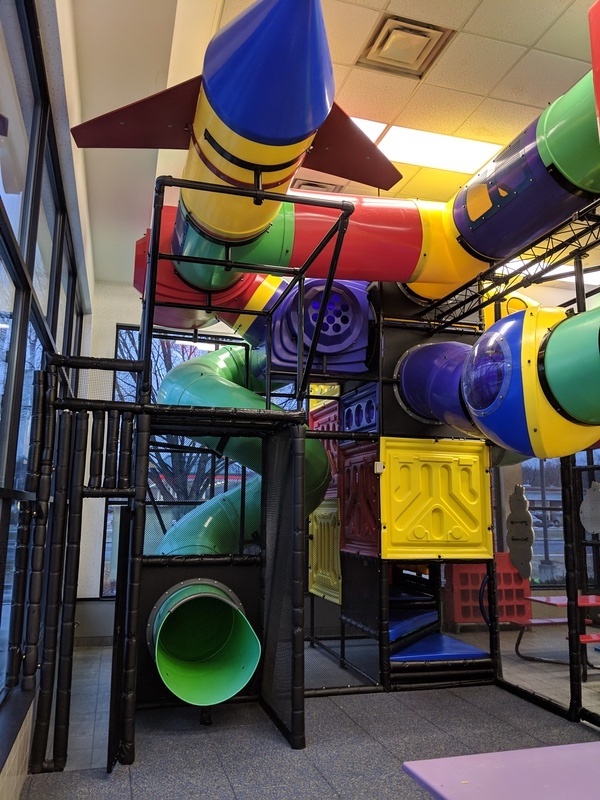 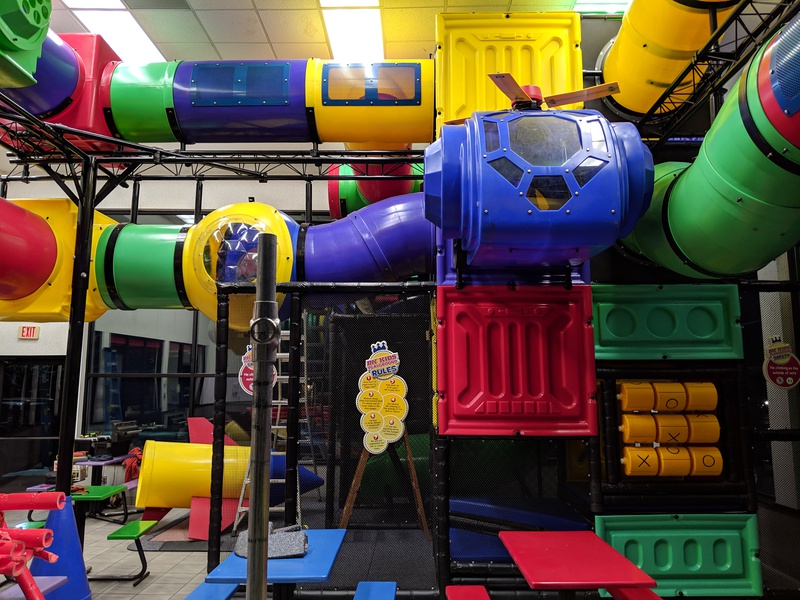 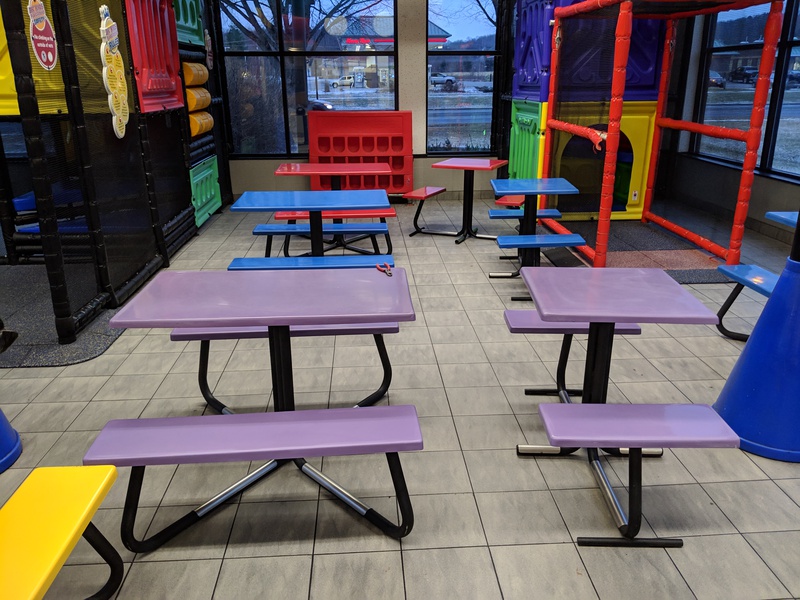 There were a lot of tables there which we were constantly moving from one side of the room to the other to keep out of the way of ladders and falling playground segments.

They were vary convenient for taking breaks though, and we ended up taking them all too! 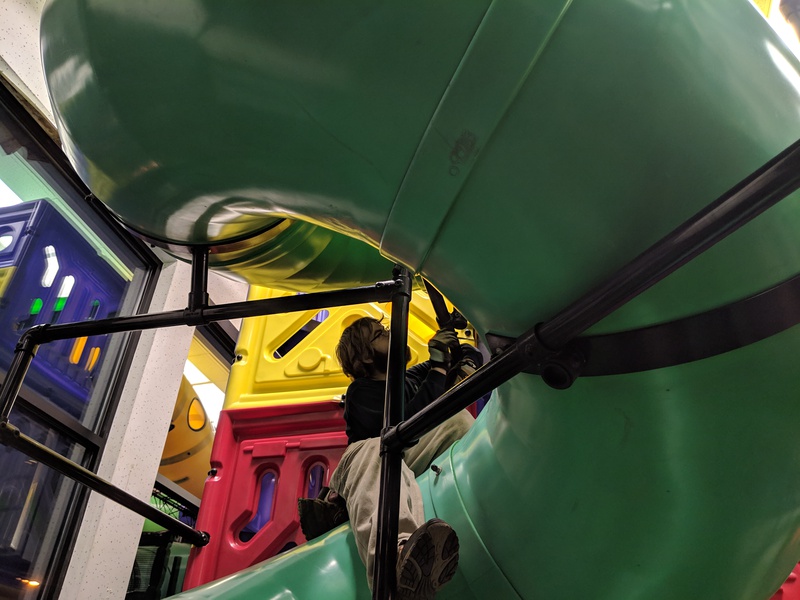 Starting on the slide. It was quite a puzzle to figure out what order to take pieces apart and what pieces locked in other pieces. We generally worked from the top down, which seemed to be a good strategy. The downside is we had to lower the highest pieces first, which as we found out had the biggest chance of swinging and breaking windows.

We were careful (lucky) enough to not break any windows, which was the one rule our Craigslist contact had passed along. 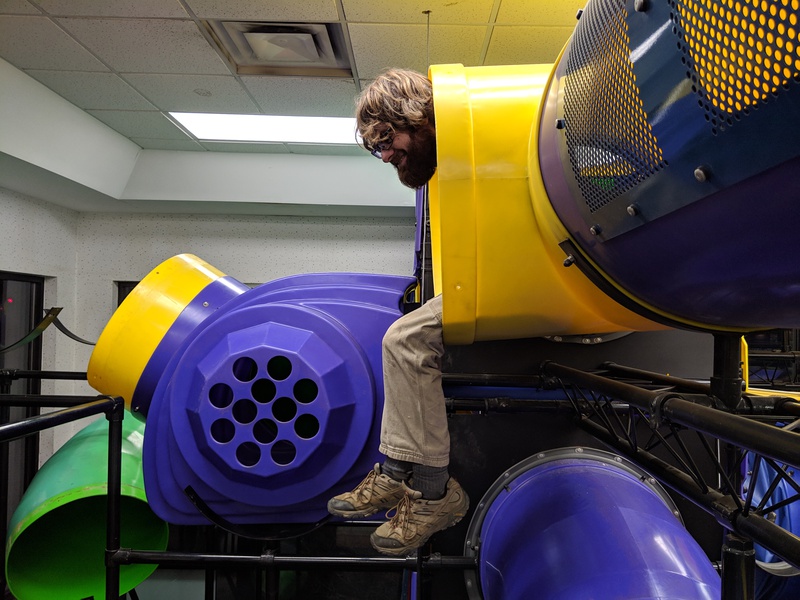 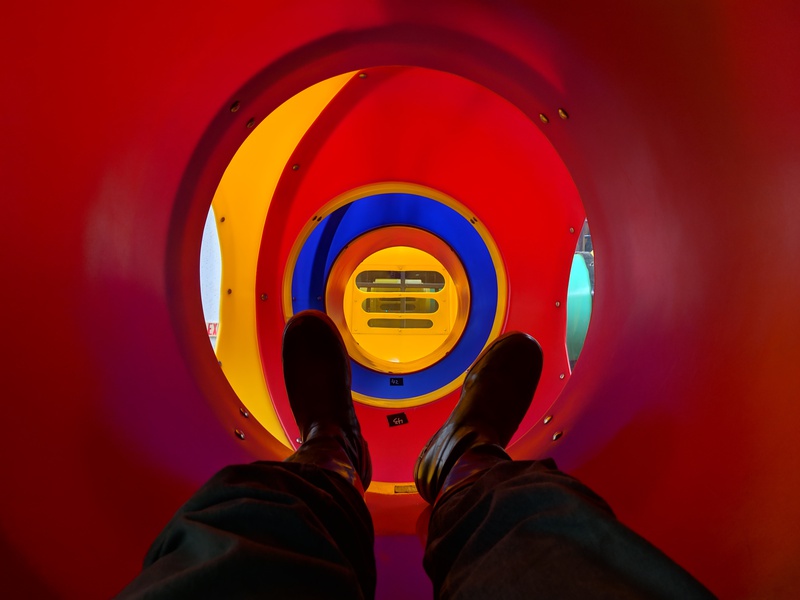 We numbered the individual sections to help with rearranging when we rebuild it. It remains to be seen how well the duct tape and marker hold up over the outdoors winter storage.

Since we were on a tight timeframe, it wasn’t possible to document the setup and label everything as well as would have been ideal. 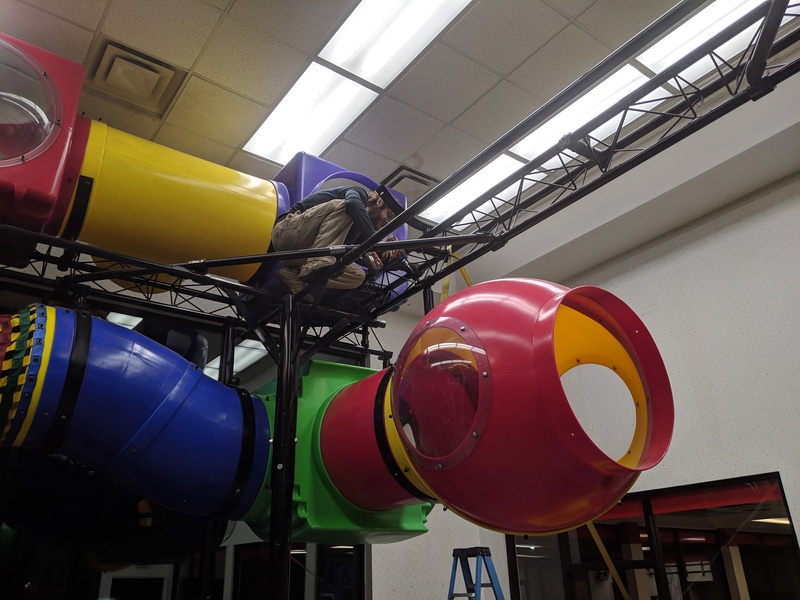 Here we are working on lowering a segment from the 2nd (middle) level. These were a lot easier to work with because we could use the truss above to help lower them.

The segments on the 3rd (top) level had to fall a couple feet before a strap would catch on the truss, which made lowering them more interesting.

View from the dining room. We had about 4 ladders, only 2 of which were tall enough for top level. We were finding that we always had either too many or too few ladders - it seemed like we always needed another moved to work on a piece, or there was an extra one in the way. 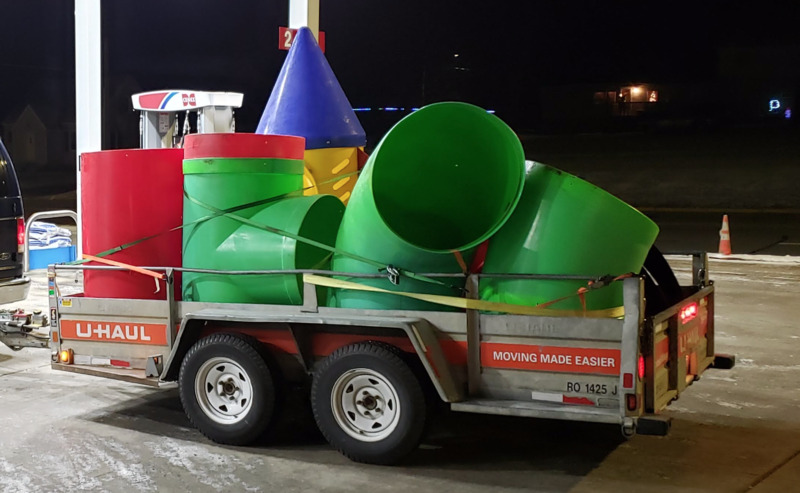 Stopping for gas on the first of my 4 loads out. In total we probably took maybe 8-10 trailer loads between all the people that pitched in to help disassemble and haul stuff away. 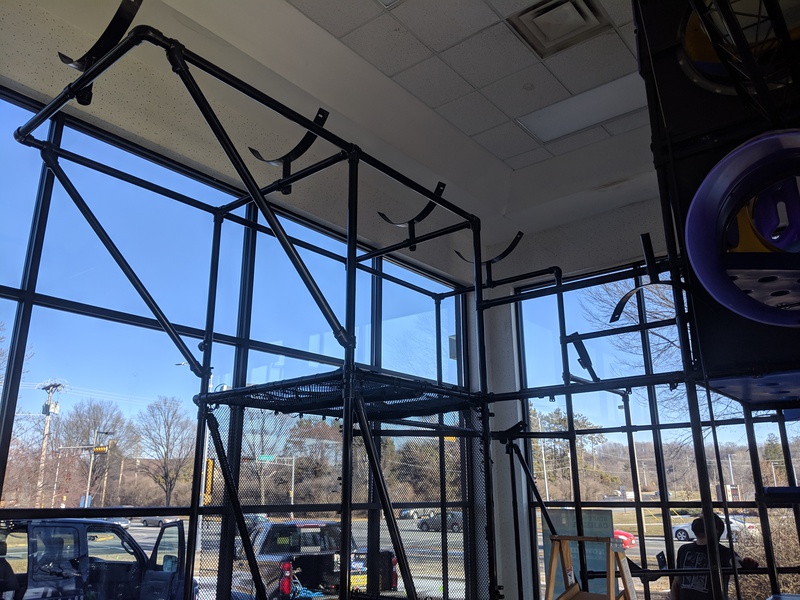 Back at it Sunday morning. We ended up with 4 of us on Saturday and worked until roughly 1AM. It was about 3AM by the time Gabe and I got to the property we were unloading at, and we camped the night there and got an early start back Sunday.

The police stopped by later in the day because they had some calls the night before of suspicious people working late at night. I’m not sure why they didn’t stop by the night before when the calls were coming in AND we were still on site. 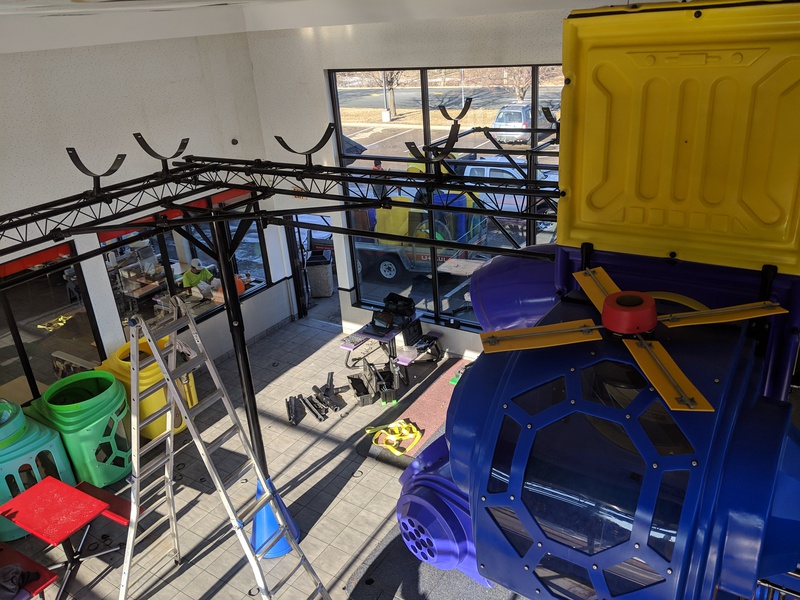 We got about half of the plastic sections removed on Saturday, and Sunday we were aiming to finish removing everything but the metal structure. 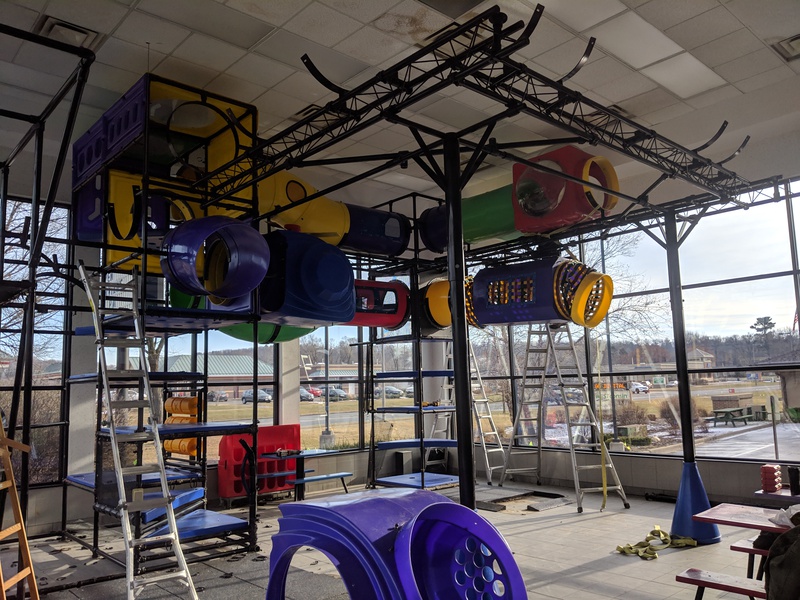 We had amassed a collection of the larger pieces, which would not fit out the door frame, and we did not want to have to cut in sections to get out.

I contacted our contact, and he gave us the OK to remove a window to get them out.

Fortunately we had a window guy with us. Unfortunately we didn’t have any window tools like big suction cups. This meant we had to do a lot of coordinated work to carefully remove the heavy window and not drop or pinch it which could break it.

The one rule was: don't break any windows! 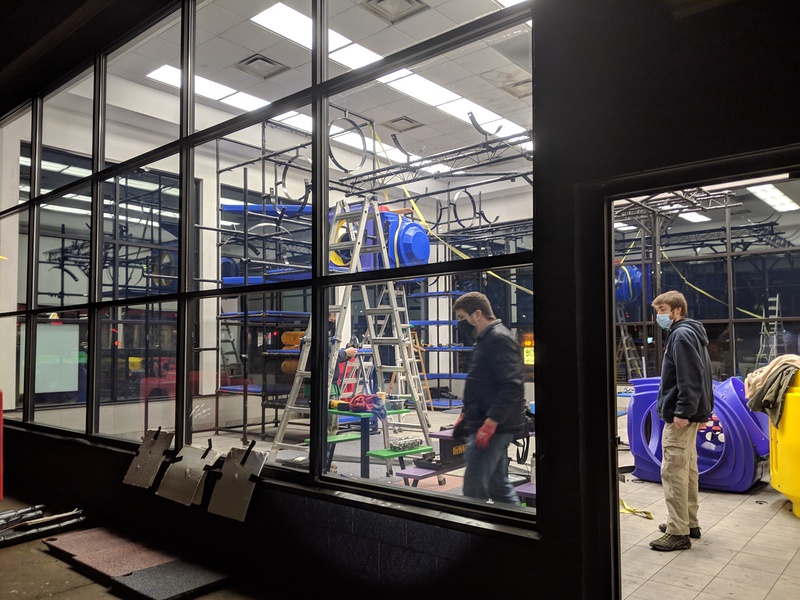 We prepped a spot to set the window. 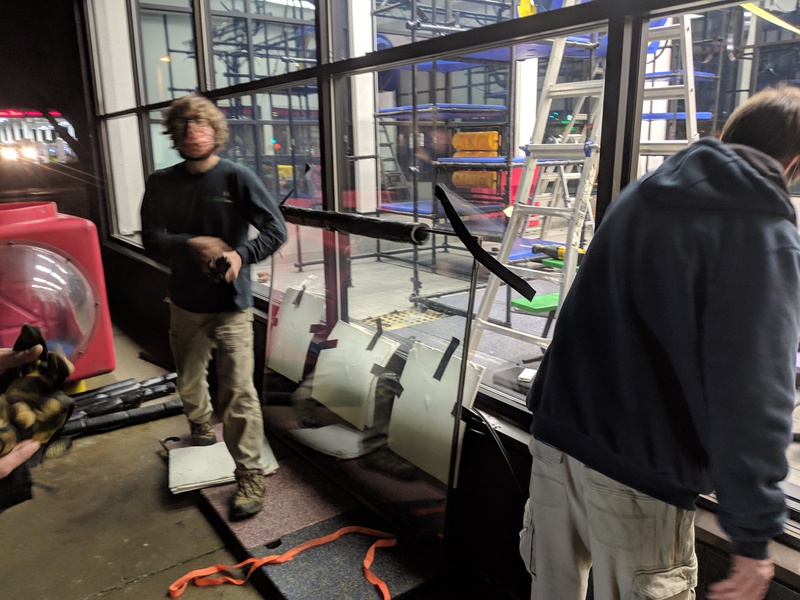 The window removed, padded, and safely duct taped in place. 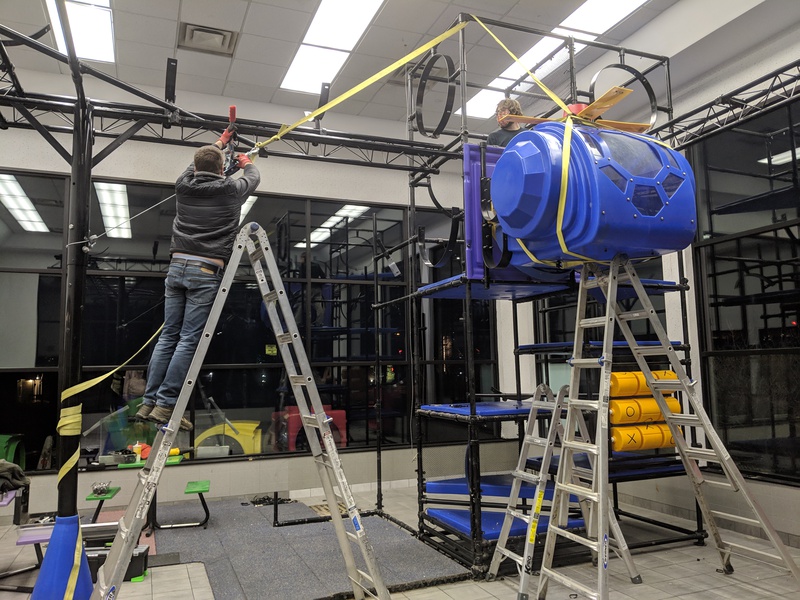 This was the heaviest piece to drop, and took a lot of coordination. We were lucky that nobody was injured more then some little scrapes with all the heavy stuff swinging around. 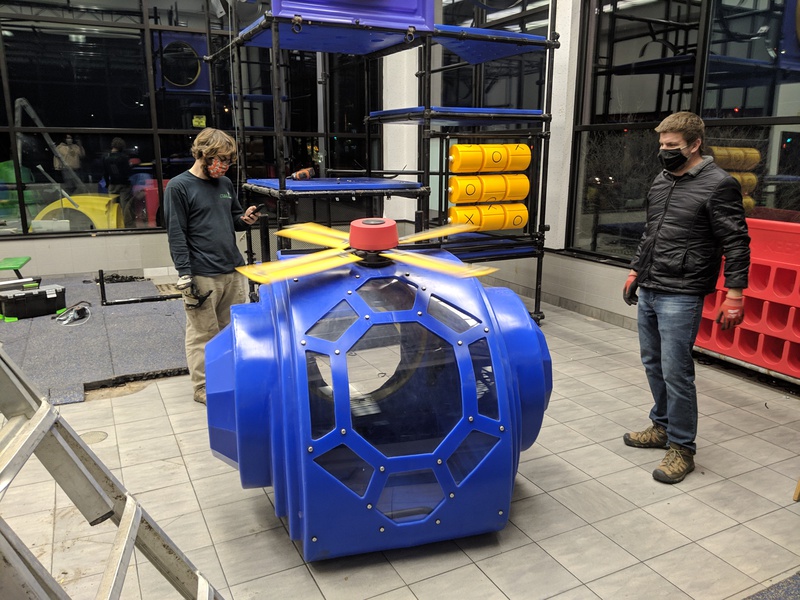 Whoever built the tile floor did a damn good job. We had a couple of pieces land with a metal pipe or corner facing down, and there was no damage to the tile! 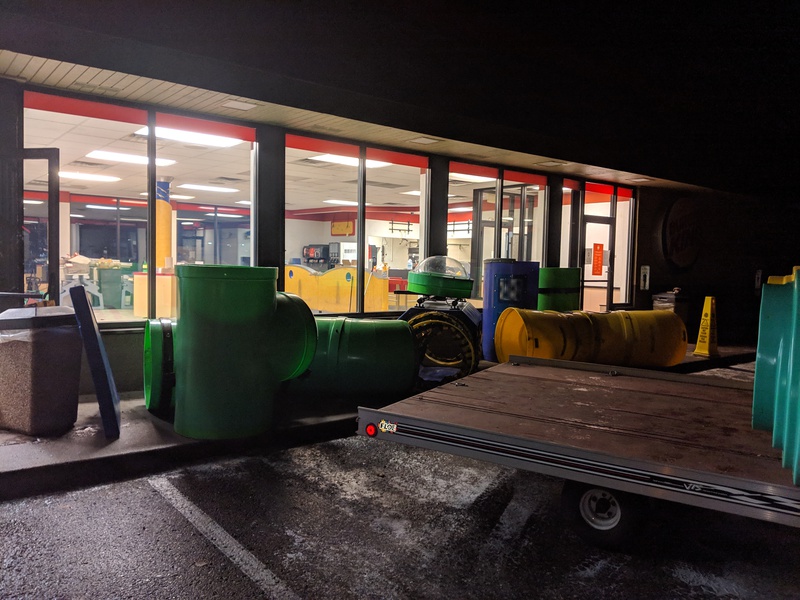 Lots of pieces outside, trying to figure out how to get all the pieces loaded unto the two trailers we had for this load. 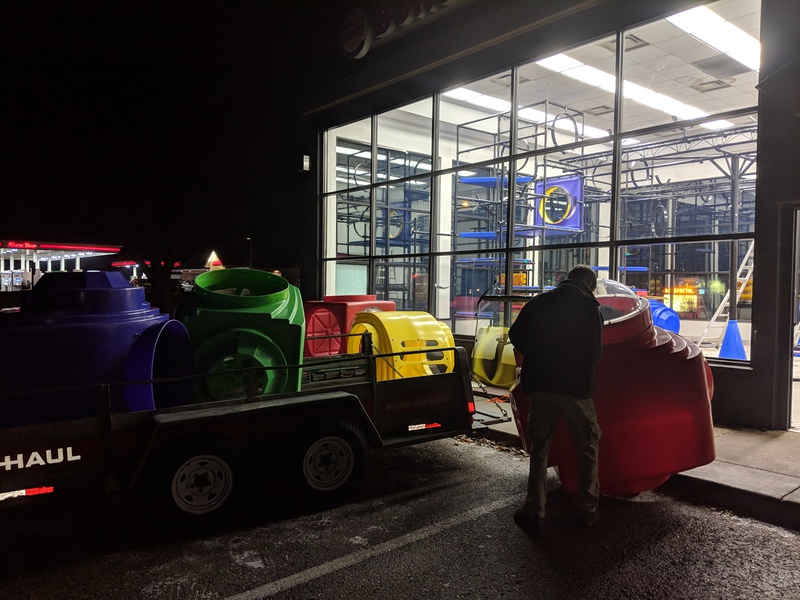 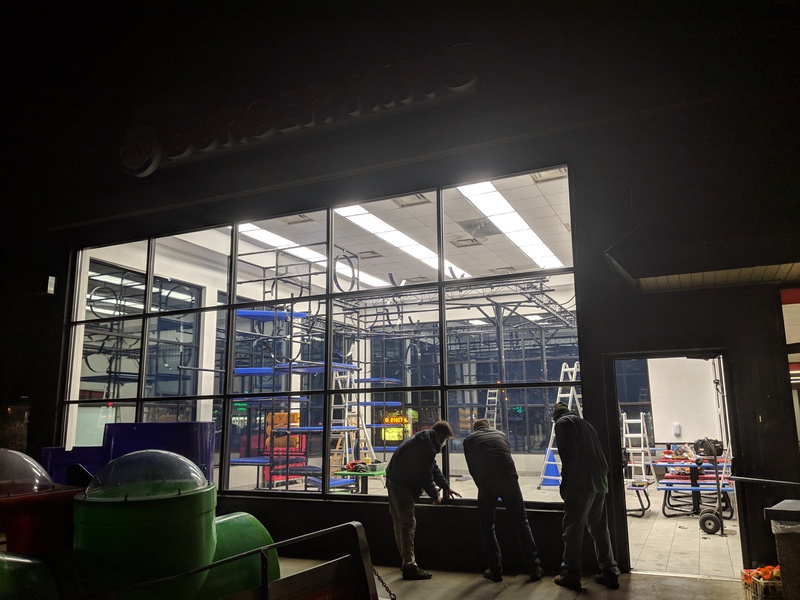 Putting the glass back in place, like we were never there. 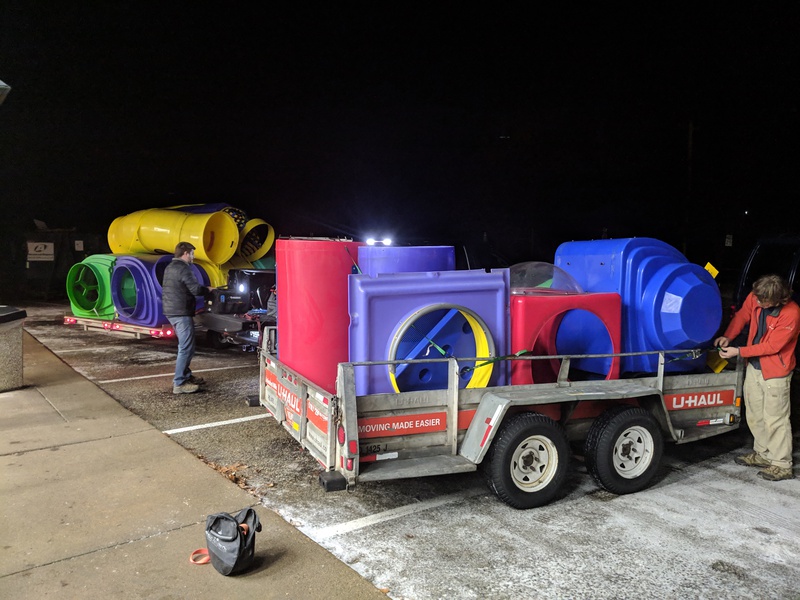 Everything loaded, getting it strapped down. 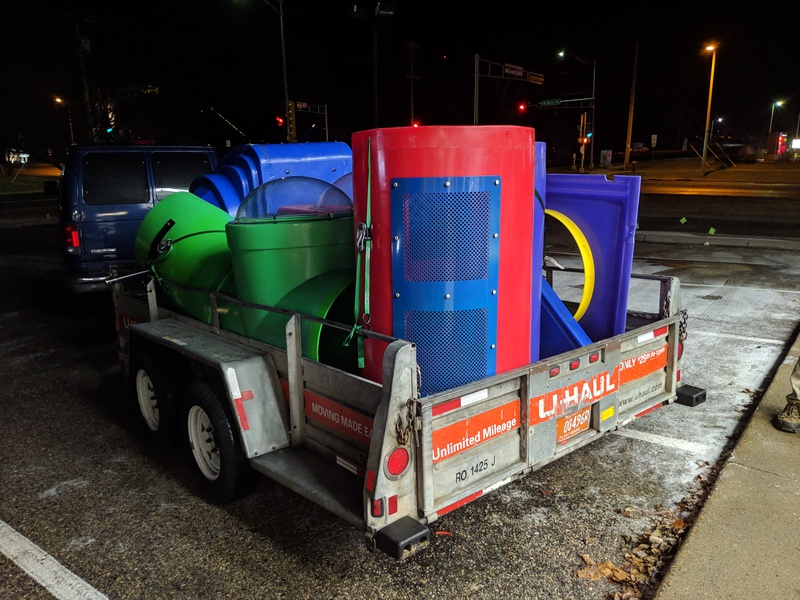 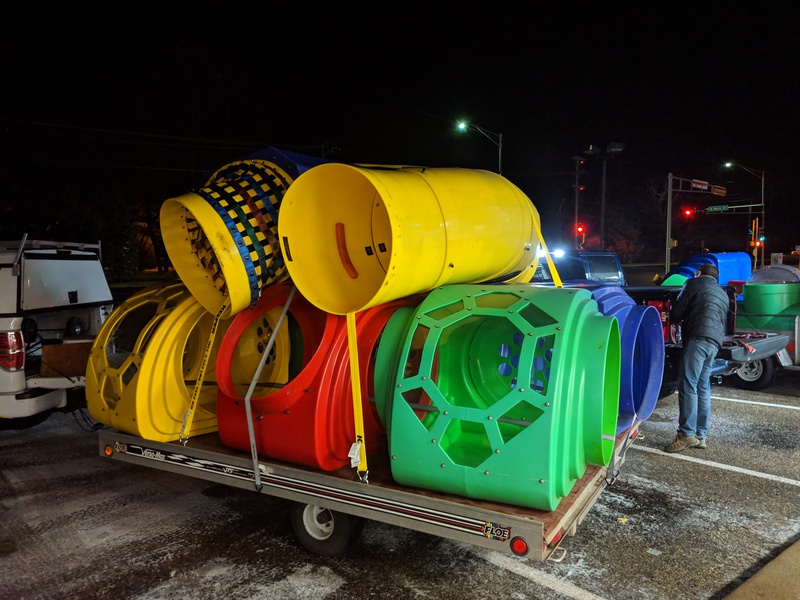 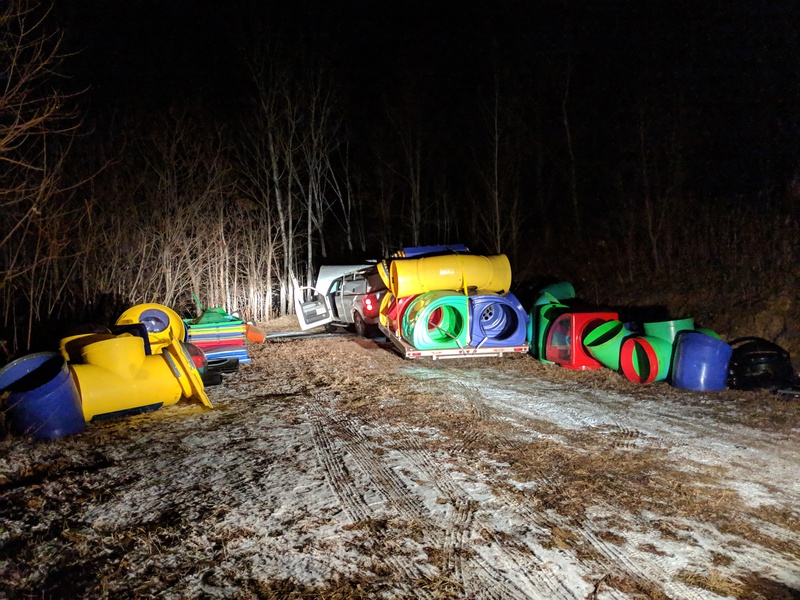 Adding to the pile at my friends property. Gabe and I were pretty tired and called it a night closer to 8PM. 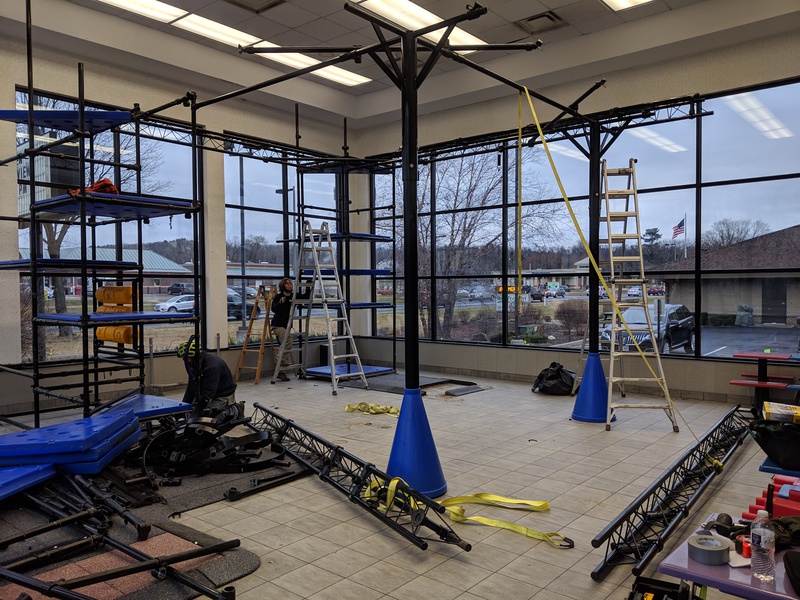 Returning Monday to finish up. We had all the structure to take down. It felt like it should go pretty fast, but we hadn’t worked with it yet so we were nervous about running into snags.

Cleaning up a little after everything is out.

The upright posts had surprisingly small hardware holding them in place. We could tip them to the side and lower, and the hardware would pop off. It makes sense since with the trusses locked in place there is a lot more rigidity in the system.

We did notice though that as we took out more plastic pieces that the whole system was less “locked” together and had a lot more sway, which was disconcerting at times. 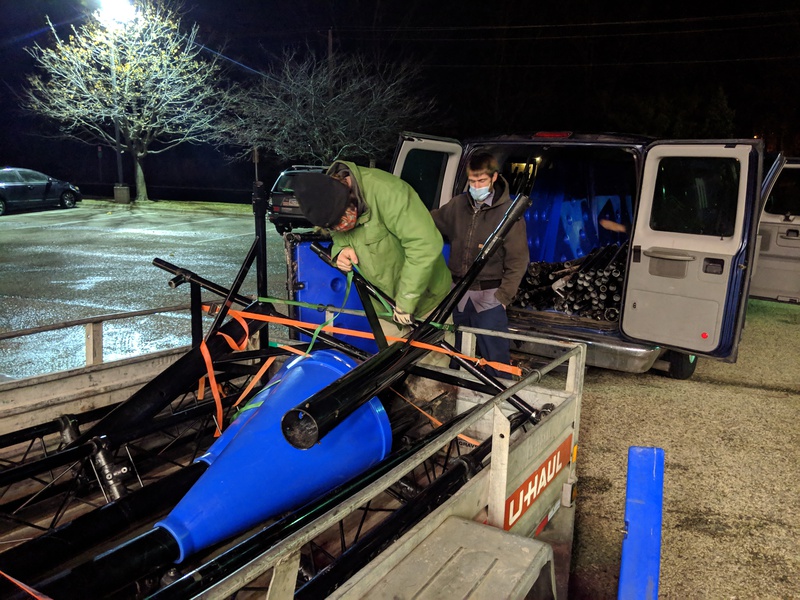 Packing up all the metal. This is going to be a LOT to sort out next spring. 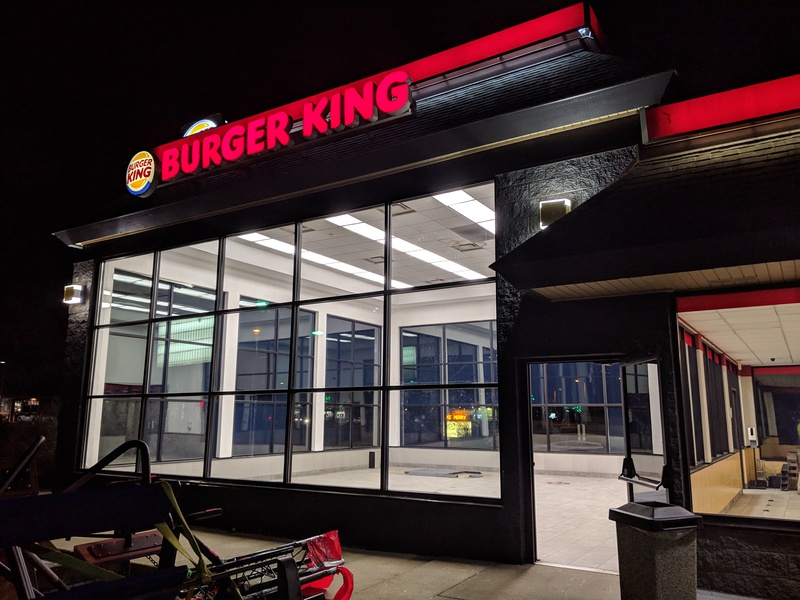 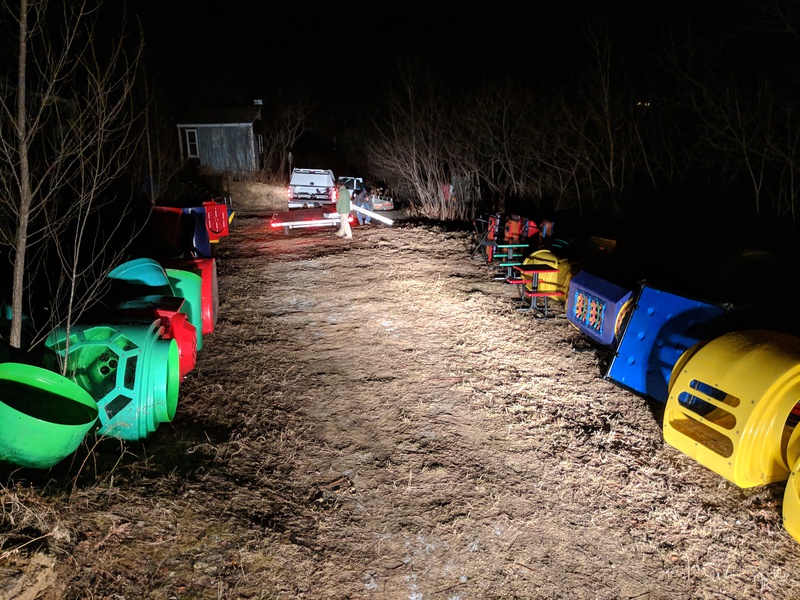 Unloading the final trailer loads. We’ll be storing it here for the winter and hopefully start reassembling it at another spot on the property spring 2021.

Thanks to my friend Gabe for many of the photos here, and dropping everything he was doing and pitching in 3 days of work dismantling and moving the Play Place.